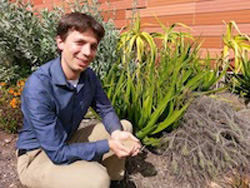 It’s in the air, it’s on your car, it gets up your nose. It’s been with us for eons, and it’s not going away anytime soon. It’s dust, and we need to understand it better to battle climate change. Jasper Kok, assistant professor in UCLA’s Department of Atmospheric & Oceanic Sciences, is doing just that.

Kok wanted to try to clean things up when it came to factoring dust into climate change models. His findings have just been published in the journal Nature Geoscience, and they are the first milestone in a multiyear project aimed at Kok’s big goal: “I want to answer the big questions: How does dust affect the atmosphere, human health, and climate change?”

It’s important to note that dust in this case is desert dust, a form of particulate matter, not the fluff under the couch that most people think of when they hear that four-letter word. Desert dust plays a positive and most critical role in keeping Earth alive and well. When it falls from the sky, it fertilizes ecosystems like the Amazon rainforest, which needs dust to provide key nutrients like phosphorus. Dust also seeds clouds, which scatter sunlight and cool the planet.

Dust is naturally emitted into the atmosphere by deserts, and by examining the geological record in ice, for instance, researchers can see how dust has changed throughout eons. These days, dust is very much affected by human action around the world. One example is the Salton Sea located just a few hours east of the UCLA campus. Due to irrigation, it is being dried out – and turning into a major dust source.

While Kok’s background is in physics, he decided to channel that expertise towards the pressing societal issue of climate change, which he calls the sum of physics, chemistry and biology. It fits in well with what many of his colleagues are also working on within the Department of Atmospheric & Oceanic Sciences, which has moved away from meteorology, or the science of the atmosphere and how it causes the Earth’s weather, to how climate change is affecting weather.

Another word for dust or particulate matter is aerosol (try not to think of the stuff that comes out of a spray can, which is entirely different). “The question of how aerosols affect climate is one that virtually every atmospheric science department in the world is working on,” Kok said.

Dust is one big uncertainty holding back models that help scientists predict climate change. As the largest aerosol by mass, it has major impacts. It both absorbs and scatters sunlight to alternately warm or cool the planet. And we don’t really know which of these two effects wins out: does dust warm or cool the planet? And will possible future increases in dust contribute to global warming (if dust is warming the planet) or oppose it (if dust is cooling the planet)?

“Desert dust is known to be very sensitive to climate change, and thus understanding the magnitude of desert dust’s impact on climate today will help us understand how it may have impacted climate previously and will impact climate in the future,” said Natalie Mahowald, a professor of atmospheric sciences at Cornell University.

Kok’s study determines the amount of dust in the atmosphere and its effect upon climate through the scattering and absorption of radiation. To do so, the study integrated measurements, satellite observations, and model simulations in a unique way. Mahowald explained, “The authors innovate and improve our understanding by synthesizing evidence from a wide variety of sources to constrain the magnitude of the impact of desert dust radiative forcing on the planet.”

That innovation came by taking a more decisive approach when it came to the traditional use of models. Kok stressed that climate models are a great tool, but they have limitations. “So we replaced what we could from what those climate models do with actual measurements,” he said.

The findings indicated that large dust, which warms, is more plentiful than previously thought, whereas fine dust, which cools, is less plentiful.

Commenting on the results published by Kok and his collaborators, Paul Ginoux of the Geophysical Fluid Dynamics Laboratory said, “This revised estimate suggests that dust has a much smaller cooling effect on climate – roughly a factor of two smaller than previous estimates. It also introduces the distinct possibility that dust is warming rather than cooling the atmosphere, with a 25% chance that the global direct radiative effect is overall positive.”

Kok explained that scientists previously thought that dust was cooling the planet, so past – and possibly future – increases in dust would oppose the greenhouse effect. Now, however, there is evidence that dust is having less of a cooling effect and might even be warming the planet. This opens up the possibility that past increases in dust have actually contributed to climate warming, and might also do so in the future. Kok’s next study will address this.

The study determined the radiative effect dust has on climate by plugging in two separate results: how much dust is in the atmosphere and what the sizes of that dust are. “Those results in itself are really important because the amount of dust in the atmosphere, and its size, links directly to human health impacts,” Kok said. “It also links to how much dust will fall out of the sky, and how much dust will fertilize ecosystems. It links to how many particles of dust are in the atmosphere to seed clouds. So this study is really a launching off point for a better understanding of the impacts of dust on the entire earth system,” he said.

Kok and other AOS faculty as well as public health researchers are working to figure out the global health impact of dust and its effects on climate change. They are also using their work to come up with an educational module that can be taken out to high schools so younger students can start to understand the science behind climate change.

“Communicating this work – and more generally what we know about how the climate is changing and what’s causing it – to students and the general public is absolutely critical to ensure that we as a society make informed decisions about how to tackle the climate change problem,” Kok said.

Photo and story by Lisa Y. Garibay, public relations manager, Division of Physical Sciences.
For more information about research in the division, email or call her at 310-825-1040.

More research highlights from the Division of Physical Sciences