David Gonzalez stands in front of the U.S. Capitol building after meeting with congressional staffers in March 2018. My research seeks to understand what makes air pollution particles toxic, with a focus on wildfire pollution. In our lab, we combine airborne chemicals in lung fluid and monitor the production of free radicals. This helps us identify specific chemicals that potentially contribute to health effects.

This retreat gives training on communicating science to policy makers. Since the fellowship started in June, there have been several webinars, readings, and correspondence to prepare for the retreat. Going into the training, I wanted to address a big elephant in the room that appears when discussing environmental science. How do we bridge the divide between conservative and liberal stances on environmental science and policy? It’s no secret that many places in America, environmental science is seen as a liberal cause, despite the bipartisan roots of the environmental movement. Why are these issues so polarizing today? Can I communicate scientific research in a way that permeates partisan divisions? Gonzalez in front of the U.S. Supreme Court building.

Let me put this in a personal context. My father immigrated from Mexico in the sixties and my mother grew up in Houston. I was born in Mexico and raised in the Rio Grande Valley and southeast Texas. My family is large and diverse in political thought. There are liberals, moderates, conservatives, and crazy people. Although there have been heated political debates, we usually manage to stay civil and respectable. At times, we even find common ground. I wanted to take these experiences to Washington and see if I could make a dent in a polarized environment.

We were required to set up meetings with congressional staffers and make a pitch. I confirmed meetings with offices of Rep. John Culberson (R-TX-7) and Rep. Kay Granger (R-TX-12). Both are co-sponsors on the Wildfire Disaster Funding Act. I advocated for distribution of correct personal and home filters during wildfires and for research funds to investigate health and economic burden of wildfire pollution. I was excited that staffers from both offices expressed support and gave me advice on how to get these ideas into appropriations. It didn’t hurt that I grew up Texas, either.

I left both offices knowing that there was more follow up to do, but also that I had achieved a goal. I communicated my research to two Texas Republicans and received a supportive response. It gave me some hope for finding common ground in the future. Shortly after I took an Uber to Dulles, VA and caught a plane back to Los Angeles. It was time to prepare for Sacramento. Each year graduate students from each UC campus travel to Sacramento to represent the UC system to California legislators. This year we were advocating for funding of 500 graduate students to help support increased undergraduate enrollment. It also happened to be the same day that Toni Atkins was being sworn in as the first woman and openly gay senate president pro tempore of California. It was a big day for California politics.

I was accompanied into the Governor’s office by three other UCLA graduate students, Dean Robin Garrell, and Associate Dean Susan Ettner. Here, introductory remarks were given by UC President Janet Napolitano. The rest of the day I was paired with fellow graduate student Chelsea Shover as we walked the halls of the California capitol and met with offices of ten legislators. Our meetings consisted of discussing our research and how we support undergraduate students. 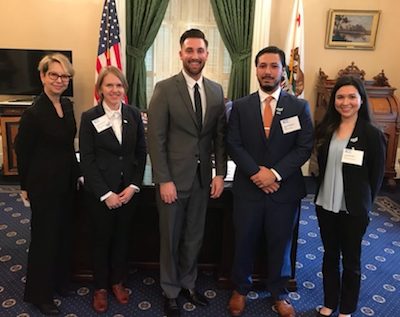 We met with Ian Calderon, majority speaker of the assembly and the only elected millennial at the capitol. In our discussion, he confirmed his support for the UC system and graduate education.

Our last meeting was with Senator Steven Bradford. At the end of this meeting, Senator Bradford took us down stairs to the Senate Chamber for pictures. On the digital screen read, “Welcome to the California Senate Chamber UCLA Graduate Research.” It was an appropriate conclusion to an exhausting day.

I pursue my research because of the impact it has on everyday lives. I want to help people disproportionately impacted by air pollution: children, the elderly, and the poor. Participating in these events, speaking my voice, and representing UCLA was an honor and a dream come true. It also helped me further understand my role as a scientist, educator, and advocate. In the future, I hope to seek a job in policy advising and ultimately run for office.

Here’s to the future and making the world a better place. 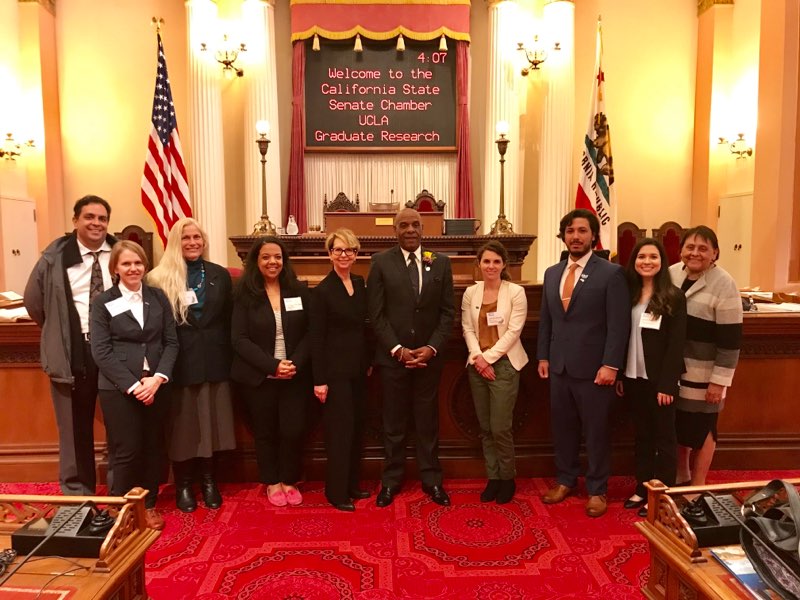