Everyone revels in the full moon, but there is far more going on there than meets the eye. Even at night, solar wind from the sun’s atmosphere throughout the solar system, streaming energetic particles like protons and electrons in all directions.

Earth’s moon has no atmosphere or magnetic field of its own to stop high-energy gusts of solar wind from slamming into the lunar surface for 75% of its orbit around our planet. The remaining 25% of the moon’s orbit encompasses the full moon phase. During this time, the moon crosses behind Earth’s magnetic umbrella, the magnetosphere, which acts as a protective shield from solar wind radiation. 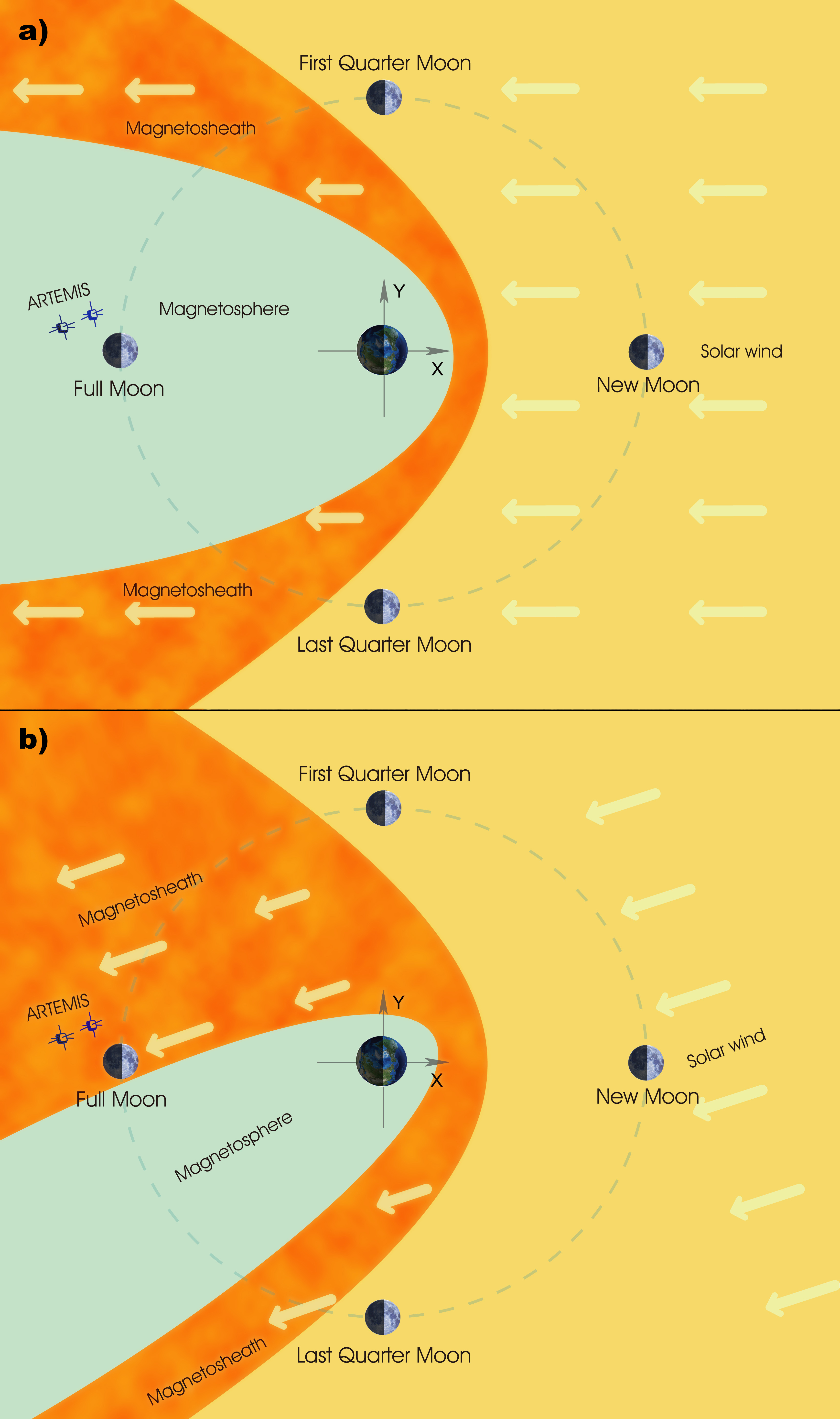 Previous simulations suggested that lunar satellites and astronauts on the surface could be considered safe during a full moon while it resides within the magnetosphere. Now, a study published in the Journal of Geophysical Research: Space Physics using the UCLA-led THEMIS-ARTEMIS lunar probes shows that the magnetosphere can flap across the moon much like a windsock, exposing it to hazardous solar wind particles.

One side of the moon always faces Earth due to synchronization with ocean tides, so understanding the effects of the solar wind at the full moon’s surface is critical for manned activity.

“Before we send astronauts back for longer periods, it is crucial that we understand the dynamics of space weather around our moon. There are still many science and safety questions to address,” said Prof. Vassilis Angelopoulos, who oversees the THEMIS-ARTEMIS missions at UCLA.

Potential hazards to lunar missions include increased static charging of surface dust which can cling to space suits and damage equipment, and solar panel degradation over time. Solar wind exposure can also influence placement of long-term lunar bases and mining operations. Since water is spontaneously formed when solar wind protons impact the lunar soil, this behavior can influence where water is deposited on the Moon’s surface that could be used for human consumption and fuel.

Intense blasts of solar wind particles from a solar storm could cause sensors and other spacecraft electronics to malfunction. Even worse, solar wind radiation might lead astronauts to develop cancer.

Earth’s magnetic shield is indeed shaped like the cone of a windsock tail and was assumed to be stable near the full moon. The study found that when the solar wind gusts at an angle, the magnetosphere tail flaps sideways away from the moon, leaving it without protection. Think of it this way: during a windy rainstorm, rain can blow sideways and get you wet, even though you’re standing underneath the umbrella. And when there’s even more wind and rain, there’s a greater chance of hail – in this case, energetic particles from a solar storm eruption.

This behavior was first predicted in 1972, but assumed to only occur at great distances from Earth, where the magnitude of flapping was sufficiently large. This was finally confirmed by NASA spacecraft some 30 years later at over 800,000 miles away, three times farther than the full Moon.

However, ARTEMIS data now show that significant magnetosphere flapping can happen unexpectedly close, within lunar orbit. This leaves the moon exposed not only to the solar wind but also to heated and compressed energetic particles within the magnetosheath, which is a turbulent boundary layer between the solar wind and Earth’s magnetic umbrella.

“This surprise deflection and exposure during a full moon demonstrates that lunar astronauts and infrastructure aren’t reliably protected by Earth’s magnetic shield,” said Dr. Jiang Liu, one of the study authors at UCLA. “We hope this discovery will lead to an updated model of the dynamic lunar environment, which could offer a safety buffer to warn lunar crews before the impact of dangerous solar particles.”

This recent study also outlines the types of gusty solar wind conditions under which magnetosphere flapping can happen, meaning the frequency of this occurrence may be underestimated. ARTEMIS observations will be used to improve predictive models by incorporating the effects of solar wind from multiple angles. This data can be factored into future mission planning and developing an early warning system beyond the current 30 minute safety margin for such events.

ARTEMIS will continue to play an important role in profiling the electromagnetic properties of the Moon, having been repurposed from its parent five-satellite mission THEMIS, launched in 2007 to study Earth’s magnetosphere and the aurora. THEMIS and ARTEMIS are jointly managed by UCLA and UC Berkeley Space Sciences Laboratory.

The UCLA Division of Physical Sciences wants you t

Do the masks we're all wearing for COVID help with The Division of Physical Sciences is presenting intimate online gatherings for incoming freshmen and transfer students to ask questions of current Physical Sciences undergrads, alumni, and faculty, and hear advice about making the most of being a student in the sciences at UCLA. Click here to read more and sign up if you’ll be joining us as a new student this year!

Join UCLA Physical Sciences for a free day of science fun and exploration for the whole family. The 11th annual Exploring Your Universe festival will offer virtual experiments, interactive activities, and opportunities to connect with UCLA scientists. There will also be short science talks, DIY planetarium shows, and so much more! Click here for more information.