While any birthday is an exciting time for many, UCLA Department of Mathematics professor William Duke will be honored on his 61st by the Forschungsinstitut für Mathematik (FIM), also known as the Institute of Mathematical Research, with a conference bringing more than 200 mathematicians from around the world together. 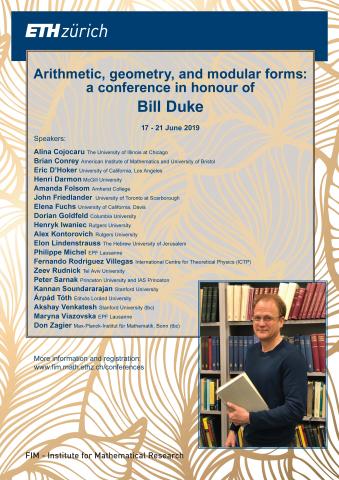 Arithmetic, geometry, and modular forms: a conference in honour of Bill Duke will be held from June 17-21, 2019 at the Swiss Federal Institute of Technology in Zurich to celebrate not only Duke’s birthday, but also his everlasting

contributions in arithmetic of modular forms that many mathematicians have used as a basis for their own research.

As a renowned mathematician, Duke has been a pioneer in research on arithmetic, geometry, and modular forms and is known as a world expert in the field. “His vast contribution has been and continues to be a source of many applications and generalizations in the world of mathematics,” said conference organizer Özlem Imamoglu.

Over his years of research, leading the way for many future mathematicians has been a crucial part of Duke’s experience, and this conference will honor just that. “I was extremely touched when I was told that this was being planned,” Duke said. “It is very gratifying to know that I’ve had a positive influence on so many people. That is actually the most important aspect of the whole thing to me.”

Professors and researchers from all over the world will be speaking on Duke’s influence in the field. UCLA’s Eric D’Hoker will join the many distinguished mathematicians in leading various talks about the work that Duke has brought to the table and what it has meant for the future work on the arithmetic of modular forms specifically. Over two hundred other mathematicians and scientists will be gathering to attend the conference and celebrate Duke’s impact.

Duke has not only made major impacts worldwide, but also on campus at UCLA. During his time here he has been chair of the Department of Mathematics and a faculty member in the UCLA Number Theory Group, a group concerned with the arithmetic of modular forms, Galois representations, and Selmer groups. He was selected as a fellow of the American Mathematical Society in 2016 “for contributions to analytic number theory and the theory of automorphic forms.” These accomplishments, coupled with his renowned research are the grounds for this celebration in Zurich.

Read more on the event page.